Let’s talk about the muscular system, again i’ll try to point only at those facts relating our yoga practice and not to become too encyclopedically boring eheheh! 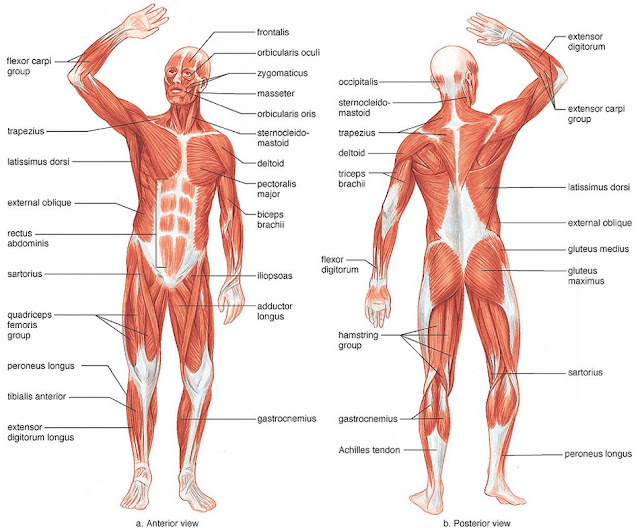 Our muscular system is made of more than 600 muscles, muscles are made of one of the 4 tissues composing our body… muscular tissue (as you know from a previous article, tissues originate (as anatomic definition!) when cells with a similar function organize together to perform that function http://www.yogatrains.org/2013/08/12/biology-and-union/).

There are 3 major types of muscles:
1- Striated or skeletal, they can be voluntarily controlled to move the body, perform activities or mantain the posture
2- Smooth or involuntary, typical of your internal organs, for example they move the food inside your stomach and intestine during digestion. Breathing and blood circulation are assisted by smooth muscles
3- Cardiac, striated muscles that work on an involuntary basis, the tissues composing our heart!

What’s the basic structure of our muscles? 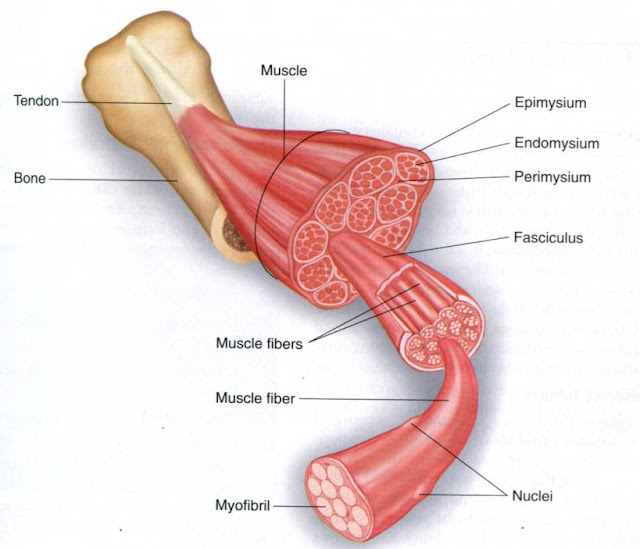 It’s made of many strands of a certain material bundled together, in the same way as our muscles are made!
There are myofilaments that together make myofibrils (the basic muscular string, as you see in the rope picture), many myofibrils are bundled together in a strand called muscle fiber, many muscle fibers are bundled together in a strand called fascicle, many fascicles are bundled together to form a muscle… easy isn’t it? Sharing the same structural concept ropes and muscles both have the quality of tensile strength, you need a good amount of force to break them while stretching their extremities!
What can a muscle do? Well, not many options… it can contract / relax / be stretched!
To understand how contraction happens let’s look at the myofibrils… they are elastic strings, the basic structure of muscular tissue! Look at your biceps in the upper arm, they’re made of millions of myofibrils (bundled on different levels), every myofibril is made of series of contiguous -even more basic- structures called sarcomeres: 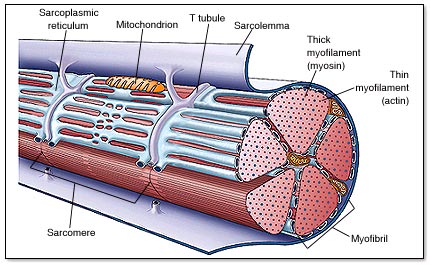 In every sarcomere there are 2 important proteins: myosin (a thick filament) and actin (a thin filament) 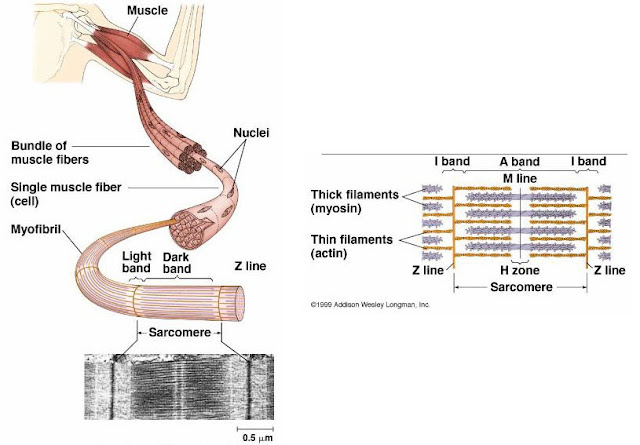 they’re the main actors for muscular contraction, the muscle receives the contraction order from your nervous system (we’ll talk much more about it, for now consider it as your communication system… for example you decide to bend your arm, so the nervous system carries to the necessary muscles in your arm the electrical impulses that will contract your biceps resulting in the bending of your elbow), after receiving the order some chemical reaction will happen in your sarcomeres

when contracted actin and myosin will slide on each other shortening the muscle… the shortening of the muscle will originate a movement between adjacent bones at a joint (obviously i’m talking here of an isotonic contraction!) (http://www.yogatrains.org/2013/08/04/joints-introduction/).
Have a look at these 2 videos, i’m sure they’ll clarify all this explanation in your mind! Don’t try to understand everything, in some part are very technical… just get what you get ehehe!!!
http://youtu.be/f0mDFP7qn1Y
The overall contraction of your muscle depends by how many sarcomeres are contracting at the same time… everyone has only 2 options: contracted or relaxed. It’s not possible for a single sarcomere to be slightly contracted… that will happen on your muscle when maybe 25% of the sarcomeres are contracted… obviously 50% is half of your possible contraction on that muscle and 100% of the sarcomeres contracting will result in your full contraction of the muscle!!

Based in London
Grown in Italy
Trains Anywhere